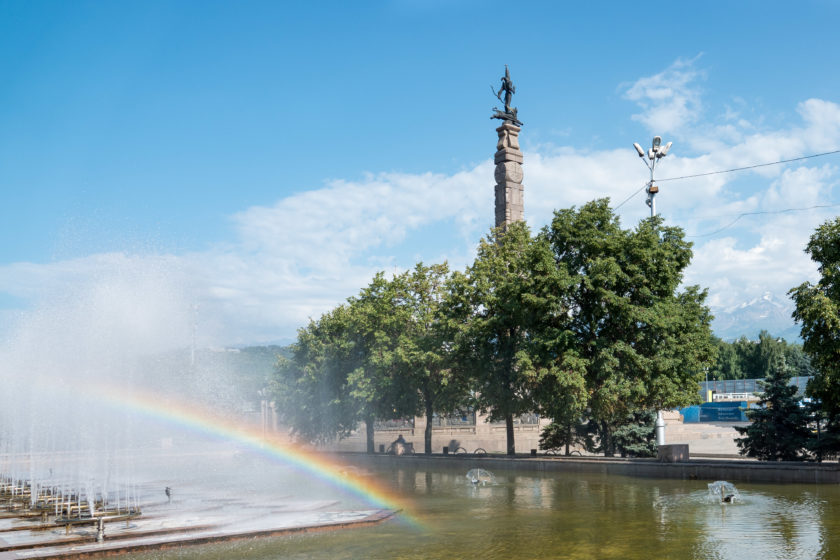 Welcoming, culturally vibrant, and easy gateway for nature lovers. Almaty is one of those places where you will linger without really knowing why.

The legend goes that Almaty is the place were all domestic apples originate, hence the name of the medieval settlement Almatu, which is a derivation of the Kazakh word for “apple” and the Russian version of the name Alma-Ata, which translates in Kazakh as “Father of Apples”.

In modern times genetic research has confirmed that our domestic apple (Malus domestica) has evolved from an endemic species of wild apple (Malus siversii) on the mountains of Southern Kazakhstan, which should effectively make the area the legendary Garden of Eden, right?

At any rate, today’s Almaty is a very lively, cosmopolitan city, former capital of the biggest land-lock country in the world, and still its most inhabited place. The history of Almaty goes back to the bronze age, and it has been an important passage on the old Silk Way.

It’s one of those places you plan to stay for a couple of days and you easily end up staying for ten.

It’s also a pleasure to walk around as it is full of green, perfectly well-kept parks, with monuments, churches, mosques, and a lot of fountains!

Indeed, Almaty has a lot of water thanks to the mountains range of the Ile-Alatau National Park, which make for a stunning backdrop and a striking surprise if you are coming from the west or from the north of the country, where nothing but flat dry never-ending steppes can be seen.

Almaty mountains are a kind of introduction to Kirghiz mountains, which are visible in the distance if you go trekking. For the nature lovers, there’s a wide choice of self-guided trekking routes to enjoy around Almaty, and camping is pretty much allowed anywhere.

I just went on a daily trip to Furmanov Peak, a steep 1,300 m. ascension starting at Medeu sports centre, just outside town and easy to reach with a taxi or by bus. An offline map like Maps.me will show you the way, it’s as easy as that.

Furmanov is just over 3,000 m. high and from there it is possible to keep trekking on a mountain ridge passing through Panorama Peak (3,260 m.), Bashuta Peak (3,355 m.), and Shymbulak Peak (3,450 m.) and then down to the arrival point of the Aerial Way station that goes back to Medeu, concluding a beautiful panoramic loop. Of course, it is also possible just to go up with the cable car and trek in altitude.

The whole region surrounding Almaty is also beautiful with plenty of national parks to check out and camping opportunities. Suggested trips: Kolsai Lakes and Charyn Canyon, and Altyn-Emel National Park. Unfortunately, I did not go to the latter, as tours are very expensive and a four-wheel drive is needed. Next time, I guess.