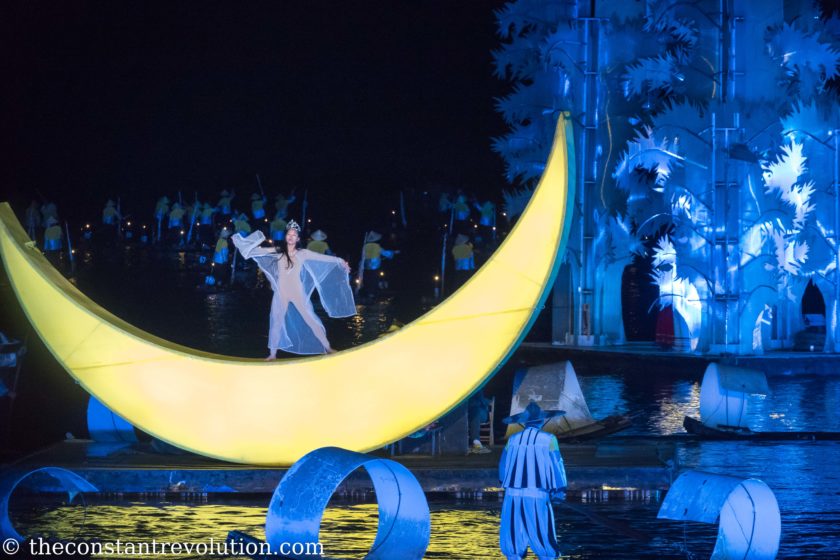 Every night, 600 people give life to a magic light show on the waters of the Li River, in Yangshuo. Impression Sanjie Liu uses the surreal shape of karst mountains as a natural backdrop for what has become the biggest open-air theatre in the world. But is it worth to see?

Karst landscapes aren’t only to be admired after a trek, at sunset or sunrise. They can also be used as a natural backdrop for a grand opera, a light show taking place entirely on the Li River, home of these beautiful mountain formations.

The show is called Impression Sanjie Liu, and the mind behind it is that of Zhang Yimou, famous film director (Hero, 2003) and choreographer of 2008 Beijing Olympics ceremonies. The show employs more than 600 extras, all locals from the Li River, in a huge coordinated effort.

All the ingredients seem to be there to make this show something truly memorable: impressive natural backdrop, huge numbers, a great talent, and technology. A powerful mix. Indeed, it has been successfully re-played almost every night since its première in 2004, and it is often described as a must see for all visitors in Yangshuo.

And I enjoyed it too. The scenery and choreography are spectacular, the music is appropriate and was created, at the time, also by famous and talented musicians. The vibe is that of a fairy tale: the costumes, the lights, and the surreal backdrop of the theatre all help in that direction. At moments I felt that chill in my spine that only something beautiful can make you feel.

But, there is a but. After the show I also felt a little disappointed. And I tried to understand why.

The legend of Sanjie Liu

I copy-paste below from another website (in italic) with more detailed information about the show. The part that interests me is the explanation of who was Sanjie Liu, and in what way the show revolves around her.

Sanjie Liu is a fairy singer in the myths and legends of the Zhuang ethnic minority. She is incomparably beautiful, and has a voice to match her beauty.

There is a legend about Sanjie Liu and a boy named A Niu, which became a love story with a happy ending, and by my understanding with none of the classical drama difficulties to overcome. Just a happy story for a happy love.

This might be one of the issues, at least to a western mind like my own. There is no drama, no pathos, no passion, no obstacles to overcome. In fact there is no story, just an encounter among two lovers, possibly useful to explain how the customs of the ethnic group worked in this kind of affairs. But that’s about it.

Yet, this is only part of the issue, because the show hasn’t been conceived to tell that story of romance. So, looking for it would be wrong on the spectator side.

In the ‘Impression Sanjie Liu’, what you can see are the impressions derived from the daily life of the people living around the Li River, rather than the specific details of the stories. From these impressions, you will gain a realistic view of the background of Sanjie’s birthplace and understand the beauty of the folk songs’ hometown.

So, the show has been conceived as an ode to Li River’s way of life, and a celebration of harmony between man and nature. It is divided into several parts, represented by different colours, and representing several aspects of Li River life. Not by chance all the 600 extras are locals, many are kids. It’s a real marvel when they sing in chorus from one side to the other of the river, basically having a conversation through singing.

But therein lies the real issue. In this ode to Li River life. If you try to understand this show the way you’d try to understand, say, Shakespeare, or Puccini, through the lens of the typical western linearity of the story, then you’ll end up disappointed. This is a show to be watched without thinking. It’s a sequence of impressions, feelings, short films to show a way of life that perhaps does no longer exist.

The legendary Sanjie Liu has come to be worshipped by the local minorities like a goddess, as a symbol of the simple way of life of the peasant, a life more in touch with nature. Not for any particular action, just because of who she was, and her beautiful voice.

After all, the show uses nature as an integral part of the performance: the mountains, the trees and the river are just part of it as much as the fishermen, the princess, and the villagers, and the open air theatre allows for a different experience depending on the caprice of the weather.

Is it worth watching this show?

It might well be impossible to watch it for what it is, at least for me. We are always looking for meaning, always looking for explanations that help to make sense out of things, instead of simply appreciating beauty. But this is certainly not what would ruin it. For what it has been created, the show is effective and quite spectacular, and it gave me a couple of chills, and everything that gives you emotions is certainly worth watching.

I do have however some critiques of different nature as well, less philosophical, as it were, and more practical:

√ The show is pretty short, only one hour. This is also due to the lack of a story. It’s a choreographic scene after the other and at one point it just ends without much of a fuzz. Although the last choreography was probably my favourite.

√ Chinese audience is incredibly rude, they speak out loud, they eat out loud, they take photos and videos all the time, meaning continuously. My neighbour was spitting in between his legs every five minutes.

√ There are some very short spoken parts, and the songs are in Chinese of course, so impossible to follow what they say, you can only enjoy the visual side of the show. Subtitles would be great.

√ The music is not live, there are no singer nor musicians, nor main dancers or actors for that matter. It’s all, and only, a big choreographic effort, with many extras, yes, but it lacks some character in my opinion, a little excitement. With so many people, all the movements are obviously slow, it’s a big machine, it would be useful to fill in with some spectacular acts, in accordance with the concept of the show of course.

√ Finally, it might be time for a remake. The show has something of an old-ish taste to it. I am not sure how to explain it, but if you are somehow used to go and see operas, theatre plays and musicals, here you get that feeling of déjà vu, despite the impressive dimensions of it. After all, it has been created almost 15 years ago.

So, conclusion, I would say yes it is worth watching it, but it isn’t a must. Expectations not too high, and of course it depends on your budget as well.

How to see it and costs

This is very simple, every single hotel, hostel or tour operator in the area proposes it, also from Guilin or Xingping. Or, if you prefer, you can go and buy the ticket yourself at the theatre. The entrance is on the East Street (Dong Jie) of Yangshuo. From West Street (Xi Jie) it takes half an hour by foot, or there are electric cars going back and forth or people offering all kind of transportation.

I got the cheapest ticket for 190 Yuan (about €24), and I was in my opinion in a perfect position, right in the middle of the theatre, not too close, not too far. So, I did not understand at all the logic of other, more expensive tickets, they go up to 680 Yuan (about €85). Perhaps there’s a special treatment for VIPs tickets, like food or drinks. Or perhaps I just got lucky 😉