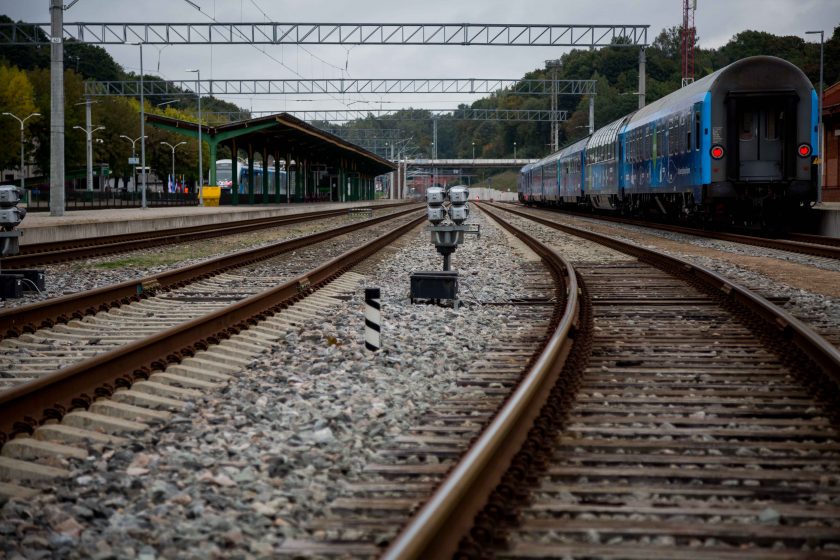 Where the Baltic meets Europe (gauge), I go through some stunning stats about the Connecting Europe Express epic journey, and I speak about Esperanto and a stunning monastery in Lithuania.

In case you forget to check out the map from time to time, as I do, Bialystok is a medium size, cute and tidy Polish town very close to the Belarus border. Sometimes I fail to remember how far Europe goes.

Despite the late arrival, we are welcomed by a small but eager delegation, representing an Association working in the field of Railways. They explain to us some of the history of the town, its important role for Poland as a gateway to the East of Europe. Indeed, the second railway ever built in Poland passed by Bialystok to connect Warsaw with the then capital of Russia, Saint Petersburg.

An interesting fact about Bialystock, the Jewish-Lithuanian ophthalmologist and philologist Lejzer Zamenhof, who invented the Esperanto language, was born and lived here. At that time,  Bialystok was part of the Lithuanian province of the Russian Tsar Empire. Zamenhof was driven by the idea that miscommunication among countries, and people, was caused by different languages, so he came up with a connecting and fraternizing language for all.

Esperanto literally means ‘he who hopes’. Probably because Zamenhof himself strongly hoped that the language would be a success. Well, perhaps it didn’t go exactly as he thought. At least for now, it seems that languages remain an important component of national and local identities. Too important to adopt a completely new language. However, Esperanto is spoken and studied worldwide still today. Zamenhof received many official recognition for his work and was nominated 12 times for the Nobel peace prize.

Zamenhof’s ideas of tolerance and mutual understanding are passed through history and have been picked up by other institutions that work on connecting people, especially in Europe.

I decide to do by foot the 20 minutes that separate us from the hotel in the city centre, so I get the chance at least to see a little bit of it. It’s 11h30 PM and in the morning and early departure is planned, at 6 AM. Bialystok is one of the many crossroads the Connecting Europe Express is crossing. This one in particular is leading us to Kaunas, in Lithuania, to go meet our little brother, the Baltic Connecting Europe Express.

I spoke a little about it in the previous post too. Basically, yesterday two trains were running simultaneously. Ours, and the one on the Baltic gauge. It went from Tallinn to Vilnius, passing by Riga, and then it came to Kaunas to meet the big brother. Kaunas is therefore where the two gauge systems meet, and as far as I understand, the only place where anyone can continue a journey by train towards the three Baltic states.

It goes without saying there were some celebrations and speeches with authorities from the three countries and the Coordinator for the TEN-T North Sea-Baltic Corridor. For once, also Desiree was called on the stage to spend a few words.

She is the main responsible person for the whole project on the European Commission side, the heart of the Connecting Europe Express, and travelling on it since the beginning of the adventure in Lisbon.

Speaking of which, during the reception that follows, a backdrop screen in the venue shows the map of our ride throughout the continent, and the road (or should I say railways) the Connecting Europe Express covered from Lisbon to Kaunas.

It’s kind of impressive to see it like that. In 21 days we have already been from the far west to the far east of Europe, and from the southernmost to the northernmost points of our epic journey. More or less, we still have to reach Stockholm, sometimes in the coming two weeks.

We have crossed 14 countries, and we shook hands with people welcoming us in 62 cities. The Baltic train covered 6 more, although I wasn’t there. So far, we have rolled through 14,500 Km. Wow! And we are still rolling!

After lunch, a little city tour is organised for us. We go to a viewpoint on a hillside, where the Conservatory (music academy) stands. An old cable car brings people up and down in a matter of a minute. It’s a short ride, but kind of cute and makes it very easy to reach the old city centre just in front of us.

Today there isn’t anyone, it’s an unusually cold day for September, we are told, the sky is permanently made of that milky, pale grey that makes all the colours disappear. The weather kind of mirrors our fatigue. We had a very short night and had no time to rest, so we are all kind of dizzying our way through the day, dreaming of the nap we won’t be able to get.

After this, we are taken beautiful Pazaislis Monastery and the Church of the Visitation. Founded in 1662, this is the largest monastery complex in Lithuania, situated just outside the city in a reservoir. It is considered the most renowned example of Baroque architecture in the country.

Fun fact, the whole monastery complex was awarded the best European Film location in 2020, during the 2021 Berlin International Film Festival. Today, it has become a four stars hotel, with restaurants, organisation of events etc.

Indeed it is impressive, too bad for the weather, I can only imagine how grand it would look on a sunny day. But that’s life and travelling. Sometimes there are grey days, and there is nothing we can do about it. We can just slide through them like ghosts in the fog.

We go back to our train. Tonight, and the next we’ll be sleeping on the Connecting Europe Express. So, I might expect a good night of sleep. Can’t speak for the others. As the night approaches, we open the dinner boxes which contain a proper Lithuanian food tasting, including a menu with the explanation of the 8 courses meal. A nice surprise.

Food always warms the heart up. So, I dig in, and I wash everything down with a Lithuanian beer. Cheers.