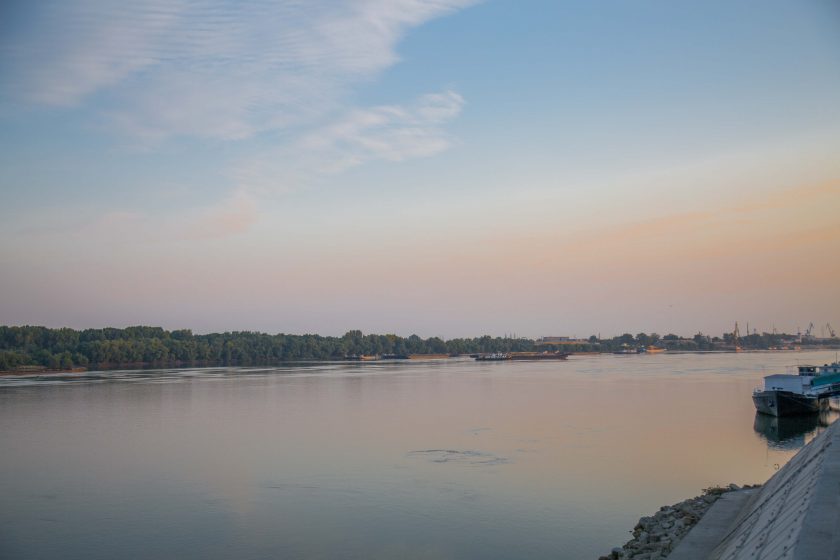 Where – incredibly – I wake up early to go see the Danube, the Connecting Europe Express crosses the border and enters Romania, and we (more they) talk about financing infrastructures in the transport sector in Bucharest.

Big day ahead for this short ride, only about 70 Km, from Ruse to Bucharest. But first things first, since I picked up the habit of not sleeping in the past 15 days or so, I decided to wake up early and go for a walk along the Danube river.

I had to, I love rivers, I grew up near one, and last night we arrived when the sun was already asleep. The river is just a dark, mysterious and quiet place in the night. It emanates a strange kind of white noise, almost as if it was possible to hear the flow of the water, with the occasional splash of a fish to interrupt it. Every time I see a river I can’t help but think of Herman Hesse’s famous novel Siddharta, and how much it is possible to learn just by observing the slow flow of those muddy waters while being idle.

Yet, one cannot see the river in darkness, and I wanted to see it.

In the morning, the Danube is like a giant awakening from a resting slumber. It just lazily stretches a little, and everything starts to move at a slow, river-like pace. Fishermen are already throwing their lines, perhaps to enjoy a plate of fried river fish, as we did last night. The morning light helps the reflection of a milky sky, and the barges are moving East, same as the flow of the water, mostly carrying charcoal, iron and gravel.

I have to run back quickly though. The Connecting Europe Express is leaving at 9H30 AM to immediately cross the border to enter Romania and stop in Giurgiu, on the other side of the Danube. Here an incredible morning welcome is awaiting, with the local authorities greeting us for the usual exchange of pennants, and gifting us with a traditional dance performance.

Ruse and Giurgiu are situated in a very important node for freight transport in this part of the continent, right on the TEN-T Rhine-Danube corridor. The idea here is to provide connections between Western and Eastern Europe along the Danube rivers system. Therefore to invest in (high speed) rail and inland waterway interconnections.

Here there is a successful example of such connections, all in one hub. A so-called trimodal centre, which connects inland waterways with roads and railways. A strong, modern and functional infrastructure built by a private-public partnership with the support of EU institutions. Unfortunately, we pass only close to it, no time to go for a visit. It would have been interesting to see how a modern transport hub manages the dynamic between different types of freight transport.

But we need to continue our journey. Bucharest is quite close, only 70 Km, but the train ride takes a couple of hours from Giurgiu. I believe this is self-explanatory, but our Connecting Europe Express is proceeding very slowly on a non-electrified line. Romania, it seems, has the same type of issues that other countries of the region have in terms of lack of infrastructure for quicker and more efficient services.

Pity, because Romania has one of the largest railway networks in the EU, with around 10,800 line-km in use, of which 4,361 km is on the TEN-T network. The potential for development is huge, as well as the need for investments, and investments need financing.

This is, in a nutshell, the subject of the day in Bucharest. Yes, because at our arrival we witnessed the most concentrated interest by media so far, lots of TV’s and journalists literally surround the train. Unsurprisingly, as the EU Commissioner for Transport Adina Valean is Romanian, and she is there, along with important members of the Romanian government, to hold a press conference at the station.

The importance of the rail sector for the economic recovery and for the EU Green Deal objectives is underlined once again. The opportunity is there to transform the European transport system and achieve carbon neutrality by 2050. The main challenge is the investments needed, especially for the rail sector.

So, financing, but financing these projects is something quite complex. Often private and public organisations are involved at several levels and to different extents, including international ones. There is certainly no space here to explain all that.

However, the moment – the presence of the Connecting Europe Express in Bucharest – sounds favourable to announce the first CEF 2021-2027 call with a €7 billion budget to support new and existing lines and better rail, road and port connections. I am afraid if you want to know what CEF is and how it works, you’ll have to leave the pages of this blog, and read some more technical and detailed information.

After the press conference, everyone goes to a fully-fledged conference to discuss, I imagine, the future of rail in Romania, how to finance projects, how to implement them, and so on.

But that’s no place for me. Not on this mission at least. I go instead for a walk around Bucharest, and then to the hotel.  Tonight we are all invited to a gala dinner, I am expecting, and looking forward to tasting some delicacies. By now this has become a gastronomic journey too, to my personal satisfaction I should add.

Tomorrow we are going for a very looooooong ride through the whole of Romania.