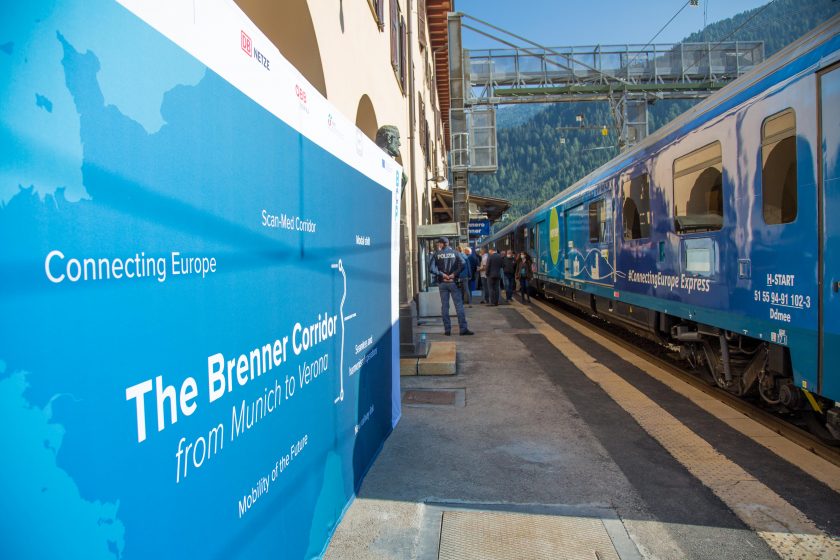 Where the Connecting Europe Express stops in Brenner to wink to the tunnel under construction, we say goodbye to Italy, and we enjoy beautiful Austrian landscapes.

Big day for the Connecting Europe Express. Not only we are saying goodbye to la bella Italia – it’s been a nice dance, grazie – but we are also stopping at Brenner to talk about, surprise surprise, the Brenner Base Tunnel.

I am being a bit sarcastic but this is actually a huge project of utmost importance. There aren’t many ways to enter Italy from the rest of Europe by rail, with any means of transport for that matter. The Alps, as majestic and beautiful as they are, protect and in some ways isolate il bel paese. However, the demand for transport, both for people and freight, is ever-growing.

To put it simply, there’s too much road traffic, which causes bottlenecks and an environmental issue. I believe we understood by now that thanks to electrification, railways are the main way forward when we are talking about clean transport.

Well, there’s bicycles of course, but I doubt we’d be always willing to take a healthy but steep bike ride to cross the border between Austria and Italy. But how cool would it be to bring your bike along in trains, and then stop by the Alpe di Siusi and the Stubaier as we did today? It’s possible, easy, and comfy.

Anyways, one partial solution to the above-mentioned issue of freight transport, I just discovered, is to use the rolling highway system by which trucks are put onto trains to cover the segment between Wörgl in Austria and Trento in Italy. In 2020, a total of 147,340 trucks were transported using this solution. I couldn’t go personally to check this out, although it must be an interesting operation. This is a way to bypass the road segment for trucks.

The next step for everyone is the completion of the Brenner Base Tunnel, which will be the longest underground railway connection in the world, 64 Km long. A fundamental node of the 9.400 Km of railways that are part of the Scandinavia-Mediterranean corridor. Not only the tunnel needs to be constructed, but also all the connections to existing infrastructures.

Well, it’s a complicated project and the detailed information can be found on their website. The point is that it will be much easier to cross borders and the capacity of the railway network to carry people and freight will increase considerably.

As construction continues, so does the Connecting Europe Express, after the usual change of locomotive. We are in Austria in the blink of an eye. I was worried about tunnels, instead the panoramic view is quite amazing, with typical green valleys and high rocky mountains in the background. If you are into photography though be warned, it is really hard to get the proper timing for a shot.

The Austrian operator, ÖBB, is super organized with their service. They spoiled us and all the guests on the train with some nice treats, like this kind of mise-en-bouche of schnitzel, risotto, and Caesar salad. In the picture you can see Chickee, our mascot, having a go at it. He/she is cute, isn’t it? The Chickee gender identity discussion is still ongoing on the train, but I think it’s a she, and I have good reasons to think so.  I’ll have to tell you more about her, in another story perhaps. For now you’ll have to do with this preview.

Time for lunch and the high mountains are already far, we are getting to Innsbruck and from there through the green valley that brings us to Salzburg and its beautiful castle. There is certainly no lack of castles to be spotted along the railway in Austria, sometimes far, sometimes a little bit closer. Here one of our colleagues met her family too. When travelling by train, even on a tight schedule, a quick hello, a hug and a photo at the station are always possible.

Then for the folklore of the day, Mr and Ms Piaty boarded the Connecting Europe Express in Lintz. With her EU flag gown, she certainly won the most popular person contest at the station. They’ll be with us only for one-stop, until the end of today’s journey in St. Pölten. But lovely to have some enthusiasts on board. This is also to remember that anyone can board, as long as they get in touch with the organisers. It’s just not the buy your ticket online kind of ride.

Day 8 is going towards its end. Austria is green all around. In one day with basically crossed the whole country, and stopped in several landmark towns. Tonight, unlike everyone else, I’ll be in Vienna. The train will be there to load some material and I’ll give a hand (I really wanted to see Vienna, never been there 🙂 ). That’s where I’ll board the train again tomorrow for the shortest ride of the trip and another border crossing.