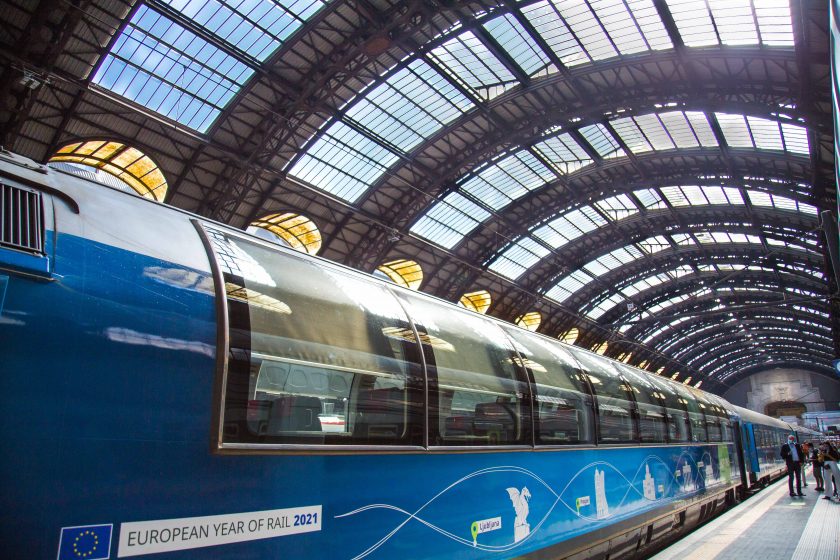 Where we end the wine itinerary with a blast, I miss a super high tech train, I speak about the importance of train connection for commercial relations, and I present the influencers on the Connecting Europe Express while I try to solve a laundry problem.

I am on a gourmet hype and last night I had to end the perfect wine itinerary by train through France with something nice from Piedmont. Despite the late arrival – it was the longest ride so far on the Connecting Europe Express, about 13 hours – most colleagues joined me for a quick tasting experience at a small, very cute local wine bar near the station. Always nice to have good wine with good company.

The train was departing only around 1 PM from Turin, so we all had the possibility to have a good night sleep and quickly check out the town. Luckily the city centre and all the attractions of Turin are within walking distance from the station, another great advantage of travelling by train.

In the meantime, me unaware and eating my gelato in the centre, an event was taking place at the station with some authorities. What can you do, sometimes information just don’t flow. It happens on such a complex event where so many different people and organisations are involved in every city, every day.

No matter, a couple of people from the European Commission were suddenly asked to be present and they made it. So they had the possibility to check out an innovative, interconnected train called POP express, parked just beside our Connecting Europe Express.

Rail companies are seriously working to provide all passengers, especially people with reduced mobility, with great travel experiences. This train is also equipped with space to carry bikes and has charging points for e-bikes. Really cool.

From a personal point of view, since I was born in Italy, I must say that I have noticed great improvements in the past few years. I travel by train on every occasion, and now in Italy it is pretty easy to find good connections, also the high-speed kind of course, and to book digitally your tickets at decent prices.

Indeed, the ride between Turin and Milan was quick and smooth. We travelled through part of the flat Po Valley, the mountains only far at the horizon. This is an agricultural and highly industrialized area, probably the beating hearth of all commercial exchanges for Italy, hence the importance of completing the missing connections with other European countries, like the Lyon-Turin.

I am told Milan, in particular, is the most important transport hub, not only for rail. It is the main highway hub in the north of Italy and it has three airports if we include Bergamo’s.  Malpensa airport is already connected to rail infrastructures, while Linate and Bergamo works are ongoing.

It is only by shifting to efficient rail networks that a city with a tradition to look into innovative solutions for the future will solve some of the problems such as congestion, and a move towards greening transport.

Well, let’s hope they all keep up the good work, while I try to solve another important problem of mine: laundry. Yes, because when you travel for a long time normally you stop here and there to wash your clothes (I mean, who has 36 pairs of underwear?!). However, we are on quite a tight schedule here, and hotels, I just found out, don’t offer express services as railways do.

Perhaps I should consult with some of my fellow travellers, like the content creators working with social media that have boarded the Connecting Europe Express. There has been three so far,  Madeline, who has already left but will be back for the final part of the journey, then Albert and Dimitris, who are still with us.

Some others should board the train in one place or the other. They are quite used to travelling, I’ll go see if they have a solution at hand to my big problem.

Tomorrow I am expecting a fantastic visual journey from Milan to Rome, passing through Genoa and Italy’s East coast.