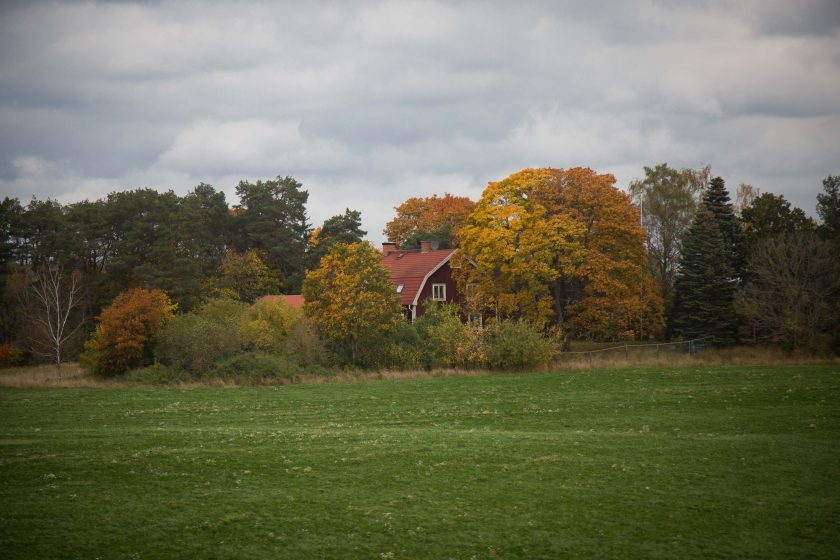 Where I take a walk around Stockholm,  there’s a lot of conferences happing on the train, and we prepare for the last night on the Connecting Europe Express

Stockholm marks a relatively late arrival, around 8 PM. Immediately after we are all invited for a dinner nearby the station, and then we crawl back to the hotel. No night walk this time. Too bad, I am sure on a Saturday night the cobbled streets and ochre-coloured buildings of the old town were very lively, populated as it is with trendy restaurants and bars.

Instead, I go for a lovely morning walk, for once accompanied by Ana and Rabea, whom I met while wandering around.  Against all odds, the weather decided to be clement, and the bright light of the sun shows us the capital in all its splendour.

The city of water, Stockholm has been built over an archipelago site at the intersection between the Baltic Sea and Lake Malaren. The old town was built by the Vikings around 1000 years ago. But there are proves of humans settlements already existing here since the Stone Age.

As the capital of a country with a centuries-old history of independence, it comes with no surprise this city has quite an impressive outlook, with all its bridges, palaces, cathedrals and castles. The range of architectural influences has no end, from the medieval layouts of the old town to Baroque, Neo-Classicism and Art Deco.

It’s a very modern city, clean, tidy, certainly with an enjoyable cultural life, and the open-mindedness of its people is palpable at every corner. I won’t spend too many words as Stockholm is, after all and rightly so, a very well known destination for travellers.

I am glad we pass by the Nobel Prize Academy building. Sir Alfred Nobel certainly understood, over a hundred years ago, what it means to connect people when he decided to award “those who, during the preceding year, have conferred the greatest benefit to humankind.” Then we just find one of the many yummy bakeries when we can restore ourselves with a black coffee and an unmissable cinnamon bun.

Time to go back to the Connecting Europe Express, which has been parked and open for exhibition the whole morning at the central station. Both in Copenhagen and Stockholm, the station speakers have been regularly announcing to commuters our presence, well the train presence, to the train’s benefit.

Right after departure the series of conferences that have started yesterday on the train continues. All kinds of rail-related subjects are discussed of course, and I discover, as reported by my colleagues, that in a high-speed rail future the segment we are covering between Stockholm and Hambourg will be covered in 5 hours, instead of the current 9.

As for me, I am still charmed about the Swedish landscape on our way back. All the autumn colours, the water, the cottages sometimes standing on a small island in the middle of a swampy lake… I totally have to come back for some relaxing time. Today we are stopping for pennants exchanges in Norrkoping, Nassjo, Alvesta, and Malmo, before re-entering Denmark, and then Germany.

Between the window views, the photo editing, and the fun discussion about the Karaoke song list for the night (our fifth and last night on the train is coming up) the day goes on at a lazy pace. We are all a bit tired from the long journey, a bit excited for the last big days ahead, and a bit sad for the approaching end of it.

But let’s keep this discussion for another time. Now, perhaps I’ll go and open one of those bottles of Bulgarian wine I got some two weeks ago, before entering Denmark and get squeezed in the sleeping car again.  (see yesterday’s post).