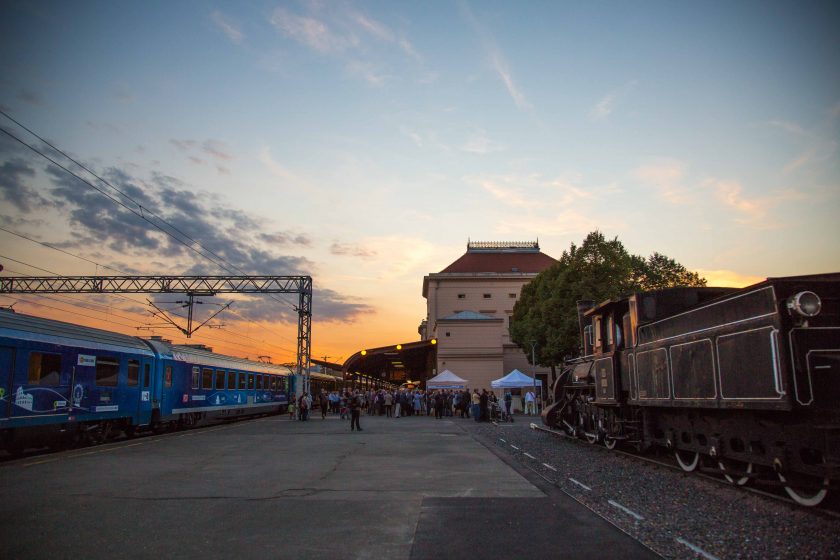 Where I am impressed by Zagreb, the Connecting Europe Express gets the first technical issue of the journey, I interview a passenger with an interesting war story, and we get COVID tested to enter Serbia.

What an amazing welcome in Zagreb. Already at our arrival at the station, where a small conference took place, we got to see a traditional music and dance performance. All the while a representative of the government announced, and I quote, that with certainty Croatia is facing a renaissance of the railways’ system in the coming decade, with an investment of 4.4 billion in infrastructures.

Very good, we look forward to that. I know by experience the country is beautiful and to be able to travel throughout it by train would be even better. Zagreb is a very lively cultural capital, also known as Small Vienna for the style the lower city has been built. It is also very green. Super cool is the horseshoe garden complex, made of eight city parks all connected to each other in a U shape. Each park is linked to cultural buildings such as academies, museums and pavilions. So nice! I loved it.

But the administrative centre is in the upper town, where there are some older buildings. A little curiosity, the lamps there still run on gas pipes that run through the buildings. A person switches them on and off in the evenings and mornings.

Icing on the cake, the following morning an amazing breakfast Orient Express style was organised for us by the Board of Tourism and the City of Zagreb. The hotel where we did it is actually the place where the Orient Express people used to have breakfast. So, all in all, an amazing welcome in Zagreb.

We are all fed and happy when we had towards the station for our daily departure. But here the first technical problem of the journey happens. Our conference coach has an issue and we have to leave it behind. We’ll probably reconnect with it only in Sofia while they do the necessary checks. This is to show again that trains and railways need regular maintenance, and that for safety purposes checks are carried on with punctuality. Safety always first!

Since we are travelling on a special train, where every coach was made by a different company from a different country, these often small technical issues are a bit more complex to sort out. Yet, we detached the coach with a smooth operation and with only 40 minutes delay, off we are direction Belgrade.

The train slides slowly through pleasant countryside, a flat area of Croatia, lots of cornfields, farms and beautiful autumn colours. I wander around the panoramic coach and I meet Barbara, from Berlin. She enjoys train rides, and she started on her own from the German capital to meet us in Zagreb.

She boarded the Connecting Europe Express to follow the footsteps of an uncle who in 1942 went to war to Africa by train, covering exactly the same route we are on between Zagreb and Athens. She found the letters her uncle exchanged at the time with the mother (Barbara’s grandmother), letters of an 18 years old going to war.

I ask her what were the uncle’s feelings going to war. She says that surprisingly he never showed fear, it wasn’t a problem for him to be there, risking his life, as if that’s just how things were, he had to serve his country. Perhaps he didn’t want to worry the mother, she says, perhaps he was just too young and feeling too strong (we all know that feeling at 18 years old). At one point he was made prisoners by the English, but the exchange of letters kept going. The real misery though came out of the family side who lived in Dessau – a city completely destroyed by the war.

“It is so nice that today I can travel by train the same route my uncle did but in peaceful times. I can talk to people, wherever they are from, I can enjoy the view and not be worried about death and destruction. I think new generations are taking peace a little too much for granted, also in Germany.” A message I certainly share with Barbara.

The journey continues and soon enough we get to the border crossing with Serbia. Yesterday we left the Schengen area, today we are leaving the EU. So, passport checked and stamped! First time for me in Serbia too. The landscape doesn’t care though, and it remains exactly the same until Belgrade.

Here we are welcomed with folkloristic music and dancers, and by a nurse who tested all of us for COVID at the station. Yes, because our green pass, that even in these times allows us to move all around Europe, here isn’t accepted. So we had to test. Speaking of the advantages of peaceful times, and EU integration here’s an easy one in times of pandemic.

So, day 11 ends like this. Now time to check out Belgrade for dinner.

Our mascot Chickee is also travelling on the Connecting Europe Express and having his own special journey. Here are some of her adventures.